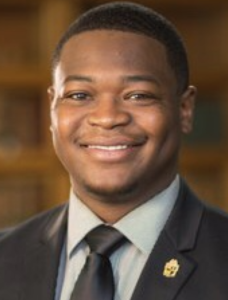 Tim joins the USGLC after serving as the District Operations Director for the Progressive Turnout Project and completing law school at the Thomas Goode Jones School of Law at Faulkner University. Tim has served in the Alabama House of Representatives as a Legislative Fellow, a Regional Field Director for a Gubernatorial campaign, Regional Field Organizer for the Alabama Democratic Party, Executive Director of Be The Change Venture Alabama, and in the U.S. Army Reserve. Tim is the Mayor of Talladega, Alabama, serving since his historic election in 2019. He was elected as the city’s first African American mayor and the youngest mayor in the last century. In addition to obtaining his J.D. degree, Tim holds a bachelor’s degree from Auburn University at Montgomery and an associate degree from Marion Military Institute.