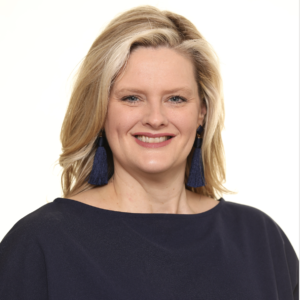 Michelle Bekkering currently serves as National Engagement Director for the U.S. Global Leadership Coalition. Prior to joining USGLC, Bekkering was nominated by the President and unanimously confirmed by the U.S. Senate as an Assistant Administrator of the U.S. Agency for International Development (USAID). A passionate advocate for women’s empowerment and equality, Bekkering was a leading architect of the White House led Women’s Global Development and Prosperity Initiative (W-GDP); a whole of U.S. Government initiative to economically empower 50 million women by 2025. Bekkering was awarded a Superior Accomplishment Award by USAID for her leadership.

Prior to joining USAID, Bekkering served twelve years at the International Republican Institute. During her tenure at IRI, Bekkering provided leadership on democracy, rights and governance initiatives in Washington, D.C. and abroad, including serving as IRI’s country director based in Indonesia. She also served on the Congressional Advisory Council of the U.S. House of Representative’s House Democracy Partnership (HDP) program.

Bekkering has served in numerous positions in the U.S. Government. In addition to her service at USAID, she served in the National Security Council under President George W. Bush and worked on Capitol Hill as an aide to Congressman Dana Rohrabacher (CA-46).

A proud native of Iowa, Michelle graduated from Dordt College in Sioux Center, Iowa and was honored with its Distinguished Alumni Award in 2015. Michelle, her husband Mark and daughter Hadley currently reside in Washington, DC.