Zabuni: Serving America, One Bag of Coffee at a Time The saying goes, “good ideas start with great coffee.” On an annual basis, Americans consume nearly 146 billion cups of coffee, making America the largest coffee consuming nation in the world. But what most consumers may not know about their daily “cup-o-joe” is whether or not the beans used in the brewing of the coffee are ethically sourced. In downtown Grand Island, Nebraska sits a former Sears Building, which houses a small business whose sole purpose is to ensure America is supplied with ethically sourced coffee beans from farmers in Africa.

Zabuni Specialty Coffee Auction started out of a love for coffee and the people involved in growing it. Kenyan-born entrepreneur, Laban Njuguna, founded Zabuni in 2017 as a platform for coffee farmers from Africa to conduct direct trade with buyers in North America and negotiate better prices for their product. “I came from a long line of coffee producers in Kenya,” Laban explained. When the opportunity arose to pursue a business venture to bridge the gap between Kenyan coffee farmers and the coffee market in the United States, Laban eagerly jumped in.

Zabuni is housed in a 30,000 sq. ft. facility. “Before we moved in, it was actually an Immigration and Customs Enforcement holding facility,” Laban said. “We had to make significant investments in not only rem

odeling the building to suit our needs, but we also made a significant investment in our warehouse, which was a section of the building not used since the 70s.”

The coffee auction’s business model allows African coffee farmers to consign their product to the company, which in turn stores it in its climate-controlled warehouse and ships it across the United States, cutting out layers of middlemen. Zabuni never owns the product, but instead acts as the platform to exchange and link the buyer to the seller via online and in person auctions at the company’s auction room. When asked how the model works in practice, Laban stated that, “If I were to sell a 132-pound bag of unroasted coffee beans in Kenya, I could sell it for $250, giving only 15% back to the farmer who sourced it. If I take the same bag and offer to connect the farmer with a buyer in America, I could get $600 and give 80% back to the farmer…It gives that farmer a chance to make a real income for the first time in their life.” When questioned about starting a business of this type in Grand Island, Nebraska, Laban laughed: “You know, I actually came to Nebraska kicking and screaming…I grew up in Nairobi, which is a city of about 4.3 million people and came here for school.” Laban met his wife, Cora, at a party in Omaha and the rest is history. When it came time to find a place to settle down and start their family, Cora suggested Aurora, Nebraska due to its proximity to her family and the community of Grand Island. When asked about how the community has responded to Zabuni’s unique business model and mission, Laban stated that, “sales of individual bags exploded locally and continues to grow.” Not only has the local consumer community been supportive, but the agricultural community has embraced Zabuni. Laban shared, “farmers simply understand farmers.”

Laban stressed that his work with Zabuni would not have come to fruition if the city of Grand Island and Nebraska had not taken a chance on him. His work has caught the attention of the greater Nebraska business community and the higher levels of state government. In 2022 alone, Laban has already attended a Nebraska Trade Mission to Jordan and the United Arab Emirates and hosted the Kenyan Vice President, William Ruto, at Zabuni for a reverse Kenyan trade mission. Laban credits coffee for the increased interest in Zabuni, saying, “It’s truly the great unifier…what better way is there to bring people together than over a cup of coffee?”

There are many Zabuni-like businesses located throughout the United States – not all coffee related, but businesses with a large international reach. And while Zabuni works mainly with the U.S. Department of Agriculture and U.S. Customs Enforcement, Laban notes that his business would not be possible without support from agencies like the U.S. International Development Finance Corporation and trade partnerships formed through the African Growth and Opportunity Act, a program supported by the U.S. Agency for International Development and other U.S. government agencies. When asked about how his business can be used as a conduit to address international issues, Laban replied, “Sustainability.” By working directly with Kenyan farmers, Laban has a wide network that he can use to educate about sustainable farming methods so farmers can get the most out of their crops. “What it all really comes down to is ethics—sustainable change comes from ethical practices.” 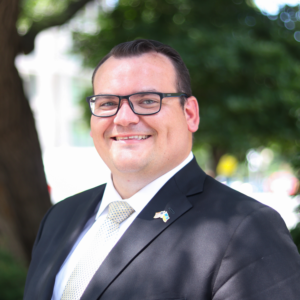