A Conversation with USADF President and CEO Travis Adkins

In honor of Black History Month, the U.S. Global Leadership Coalition invited Travis Adkins, President and CEO of the U.S. African Development Foundation (USADF), to join us in a discussion on his perspective of U.S. development diplomacy. Adkins is among the select few Black Americans who’ve been able to serve at the highest levels in development and diplomacy, a major accomplishment, especially when only about 7% of the U.S. Foreign Service is comprised of Black Americans.

Adkins has an over 20-year distinguished career in foreign policy and African development. He was selected to serve as USADF’s 10th President and CEO and was sworn in January 2022. Below are a few highlights from the powerful and inspiring discussion with Mr. Adkins held on February 11, 2022:

President and CEO Adkins, you often cite your experience at Fisk University, an Historically Black College and University (HBCU), as having a significant influence on your professional work. Could you share more about how attending an HBCU helped you seek a career in foreign policy and diplomacy and African development?

Adkins: I had the pleasure of attending Fisk University. One of our most illustrious alumni, former Rep. John Lewis, walked across the Edmund Pettus Bridge on that Bloody Sunday. Nikki Giovanni, W.E.B. Du Bois, and so many other great scholars have come from the Fisk community. I think you will find that it’s no accident that so many of the most prominent Black Americans who are in the public sphere today have roots at HBCUs. Even the ones who don’t, [you’ll find] their parents or grandparents have that linkage. It was an honor, opportunity, and privilege to try to be a legatee of those great people, of our great people. And to try again to serve and offer a unique perspective of, as Ta-Nehisi Coates calls it, the dungeon view. Those of us who have the dungeon view of America know what our nation looks like from beneath – from the hulls of ships, from an underclass, from being segregated out of the mainstream of our society, and the insight that gives us about humanity, brotherhood, love, and what democracy is or is supposed to be. I knew that going into a place like [Fisk], I could receive the kind of training, skills, and inner engineering of my heart and intellect that would allow me to serve my community with skill and to try to have an impact.

Adkins: To get to your point, it has fallen to 3%, but guess what, it was only 7% before it fell to 3%. That was the tragedy, not that it fell to 3% from 7%. The question is about the culture of the State Department and the messaging that we’re giving to the world about America. Imagine what it takes for people who loved America when America refused to love them back to then represent their country in the world. There is the pipeline and recruitment challenge, but there’s also the internal culture and the retention challenge. We need to begin to look at that seriously, which I think we have over the last couple of years, and find out how to sustain it.

In FY21, USADF was able to award over $30 million in development grants to over 329 African businesses. What does USADF have planned to ensure that more African businesses can receive critical financial assistance during these trying times?

Adkins: We’re very excited about where we are. We’re looking at how African nations are suffering in the COVID-19 moment and in the post-COVID-19 moment. We hear so much about vaccine inequality and things of that nature, but under all that are the everyday people of Africa trying to sustain businesses that they created through the pandemic. Many of them have lost those enterprises. Many of them want to try to start or restart their enterprises. We’re looking at what we can do with smallholder entrepreneurs and farmers. We are looking at women’s access to be leaders in the renewable energy space. We’re looking at climate resiliency and food security issues, even issues of electrification as it relates to health care facilities. We’re looking specifically at the Sahel , the Great Lakes, and the Horn of Africa, regions of the continent where history and the challenges of governance and climate change have collided together in a way that makes livelihoods very difficult. The thing that we think about is our place in the foreign assistance toolkit of the United States. We know that there are issues the State Department or USAID can’t focus on that we can. The needs of the everyday people persist, no matter what is happening with government or climate issues.

Our model of 100% African-owned and African-led development initiatives, I think, is what really sets us apart. There is no scenario in which we are telling African people what we think they should do. We are supporting initiatives that they’re already doing. It’s really unique. Our staff is over 60% women and over 60% underrepresented groups and people of color. Even though we’re smaller than some of the other development agencies, to me, that doesn’t matter. That’s not the point. What matters is the example that we set in our approach in how we show up and in who we give opportunity to. For me, that’s what makes us a leader in this space.

What advice would you offer to young students or professionals who are looking to enter an African development or US Foreign Service career?

Adkins: The thing that I always say to students and folks who allow me the honor to mentor them is an Arthur Ashe quote: “Start where you are, use what you have, do what you can.” When I was coming along at a younger stage of my career, I had two groups of mentors, one said, “Pick one thing that you love, drill down on it, and become the best at it.” Another group said, “You’re too young for that. Go out here, do everything, figure out what you like, figure out what you don’t like. And then set your course.” I chose the path of the second group. One of the reasons why is because, when you’re earlier in your career, you may not actually be able to get an opportunity in the exact thing you want to do. But maybe it’s adjacent to what you want to do. Maybe it’s tangential to what you want to do. Then at a certain point in your mid-career you have a really wide [range] and broad level of experience to get you where you want to go.

For folks who are early in their career, you should never underestimate the power of people and the power of communities. People say it’s not what you know, it’s who you know, but even if you know a lot of people, you still have to know something. I would encourage you all, not to develop networks, but to develop communities. The path that I had chosen is to find the people who loved what I love, who are just one step or two steps ahead of me, and to connect to people who were the thought leaders and the world leaders in the field that I was in. You have to build your well before you’re thirsty. You have to build relationships and community and connections before you get into a space where you’re looking for a job or you’re looking for an internship or you’re looking for an opportunity or you’re looking for a recommendation letter. For me, it has been finding the thing that I love, diving into it with both feet, bringing my whole heart and connecting myself to other people who have similar interests. We don’t talk about it much, but simple things like kindness and respect and expressions of gratitude for your mentors, giving cards to people who held informational interviews with you, and following up with people that you’ve asked to help you on something go a long way. Those are the kind of soft skills that will allow you to develop the kind of enduring relationships that I’m talking about. 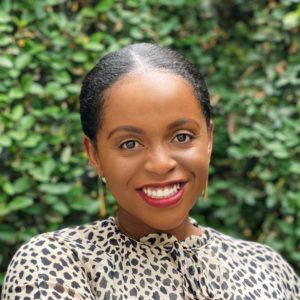