Comparing Apples to Apples at State and DoD

National security has traditionally focused on the threat of powerful states, but there is a growing consensus that weak and fragile states are a significant threat today as they may become havens for extremism and international crime, foster regional instability, and lead to humanitarian crises.  Such states also pose additional challenges for American foreign policy, as the tools to deal with them are not coordinated as closely as they could be across civilian and military government agencies. 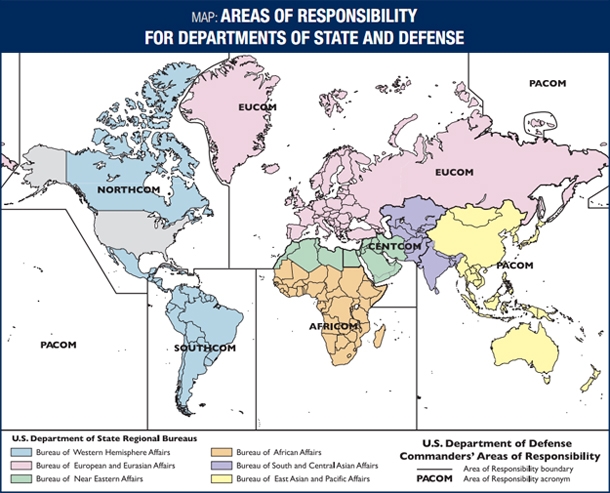 Take Pakistan, a critical case for the United States.   The India -Pakistan border is in a single area of responsibility for the State Department’s Bureau of South and Central Asian Affairs, while for the Department of Defense, Pakistan is in CENTCOM, but India is part of PACOM.  The State Department’s regional focus lends itself to a policy that addresses the Kashmir region, while DoD’s regional divisions have CENTCOM focusing on the border between Pakistan and Afghanistan in CENTCOM, while India is covered separately in PACOM.

These divisions are not merely a problem of cartography but raise questions about aid effectiveness.  The BPC recommends civilian and military leadership structures and regional divisions be aligned together to ensure better cooperation, particularly in strategically significant and sensitive conflict zones. While the National Security Council in principle bears responsibility for coordination among these departments, the report suggests that “in reality the disagreements are too numerous and, when taken individually, too minor to merit the attention of senior NSC policymakers.”

Aligning the geographic and policy structures within State, USAID, and DoD would be one step toward a more coordinated interagency strategic outlook.  The BPC report offers additional suggestions for clarifying the multiple U.S. departments and agencies involved in strengthening fragile states.   These include consolidating rule of law assistance into USAID and creating a joint account for dealing with fragile states, which would be spent according to plans drawn jointly by the agencies.

Such steps would be effective in coordinating all the tools of U.S. national security strategy to work more effectively.  The BPC report builds on the recommendations of other efforts to reform U.S. diplomatic structures and policies, like the QDDR, which emphasized the need to elevate civilian national security tools of the United States government to address the complex global environment we are in today.  This is easier said than done, to be sure, but a helpful step would be for our civilian and military tools of foreign policy to see the world in the same way.